MLS CAREER: The Revolution’s leading scorer in 2015 returns for his third full season with New England…Joined the team in 2013 on loan from Denmark’s Randers FC via a trade with D.C. United…Through April 2016, career totals include 89 games played, 59 starts, 25 goals, nine assists, 108 shots, and 58 shots on goal…Has added four goals and one assist in six postseason games, with five starts…In 2015, earned the Revolution’s Golden Boot award with 10 goals and added four assists…Started 13-of-18 games played in 2014 and tallied three goals and four assists…Started all five postseason matches and netted four goals…Played in four games off the bench in first season with New England…Began MLS career in 2011 with D.C. United on loan from Randers FC, where he scored 11 goals with one assist in 26 games, starting 18.

2016: Played in eight matches, with three starts, and scored one goal through the month of April…(3/6) at HOU: Scored in the 52nd minute for his first goal of the season…(3/12) vs. DC: Earned the start, but was substituted off after 34 minutes due to an injury…(4/17) at ORL: Attempted two shots on goal in 28 minutes of action as a second-half sub…(4/27) vs. POR: Returned to the starting lineup, but exited the game after only 35 minutes with a groin injury.

2015: Appeared in 33 regular season games with the Revolution, earning 25 starts…Scored a team-best 10 goals and added four assists to claim the club’s Golden Boot award…Tied for the 15th most goals in MLS…Reached double-figures in goals for the first time since 2011…Surpassed previous season’s total for goals, shots, and shots on goal in only 10 games, helping the Revs go 6-1-2 in games in which he scored…Scored in four straight games from April 19 to May 8, the longest streak of his MLS career and tied for the second longest in MLS in 2015…(4/19) at PHI: Netted first goal of the season in the 2-1 win…(4/25) vs RSL: Contributed to the dominant 4-0 victory with one goal in three shots...(5/2) vs. NY: Played all 90 minutes and scored in the 2-1 win…(5/8) at ORL: In the team’s first game against Orlando City SC, scored one goal in the 2-2 draw, extending his career-long streak of games with a goal to four…(5/23) vs. DC: Put one in the net against his old team in a 1-1 draw…(6/13) vs. CHI: Played 90 minutes and scored in the 2-0 win…(6/21) at DC: Scored in second straight game and for the second time against his old club in 2015…(8/1) vs. TOR: Recorded first multi-goal game since recording a hat trick for D.C. United on Sept. 10, 2011…Earned a spot on MLSSoccer.com’s Team of the Week for his two-goal performance…(8/29) at PHI: Recorded the game-winning assist, his first in nearly a year…(9/5) vs. ORL: Tallied the game-winning assist in a second straight game, marking the first time in his MLS career he recorded assists in consecutive games…(10/25) at NYC: Scored the game-winning goal in the regular season finale, a 3-1 win, to reach double-digits in goals for the first time since 2011…Goal was his first game-winner since Sept. 7, 2014…Postseason: (10/28) at DC: Played 20 minutes as a sub.

2014: Made 18 regular season appearances, with 13 starts, in first full season with the Revolution…Scored three goals and added four assists, 17 shots, and eight shots on goal…Limited by calf and hamstring injuries early in the season…The Revs posted a 3-0-1 record when he recorded an assist…Totaled four postseason goals and one assist in five starts, with those goals coming two at a time in what were the Revolution’s first ever multi-goal postseason performances…Also made two substitute appearances in the U.S. Open Cup, coming off the bench against Richmond and Rochester…(7/19) at DAL: Made first start for the club, playing 56 minutes…(7/30) vs. COL: Returned to the starting lineup and registered first assist with the Revolution, setting up Lee Nguyen’s goal in the 3-0 victory…(8/2) at NY: Opened his Revolution scoring account…Started and played 58 minutes…(8/16) vs. POR: Scored in a second straight game, tallying in the first half of a 1-1 draw…(8/30) at TOR: Played all 90 minutes and registered an assist…(9/7) vs. CHI: Notched third goal with the club, the game-winner in a 2-1 home victory…(9/13) vs. MTL: Recorded final point of the season, an assist in the 2-1 win…Postseason: (11/1) at CLB: Started and scored two goals in the 4-2 victory…Marked the first multi-goal performance in Revolution postseason history…(11/9) vs. CLB: Added one assist in the second leg of the Eastern Conference Semifinal Series, setting up Jose Goncalves’ game-winning goal…(11/29) vs. NY: Scored both goals in the 2-2 draw, the second leg of the Eastern Conference Championship…Marked his second multi-goal performance of the 2014 MLS Cup Playoffs.

2013: Joined the Revolution on loan from Denmark’s Randers FC via a trade with D.C. United on Aug. 9…Began training with the club on Aug. 13…Made four appearances off the bench in his first season with New England…(8/17) vs. CHI: Made Revolution debut, coming on for Chad Barrett in the 79th minute.

2011 (w/ D.C. United): Signed on loan by D.C. United from French club Sochaux…Tallied 11 goals and one assist in 26 games, with 18 starts, in his first MLS season…Scored at least once in each of his first four games played in MLS, totaling five goals during that span…Made an impact off the bench, as five of his 11 goals came as a substitute…Finished as the runner-up for MLS Comeback Player of the Year award…(3/19) vs. CLB: Scored twice in his MLS debut, with both goals coming off the bench…Slotted home the game-winner in the 3-1 win…(3/26) at NE: Played 45 minutes and scored his third goal of the season…(4/9) vs. LA: After sitting out the previous match, scored a goal in his third straight game played as a substitute…(4/16) at TOR: Notched yet another early-season goal in the team’s 3-0 win...(5/4) vs. SEA: Returned to the scoresheet with the game-winning goal and his first MLS assist in the 2-1 win…(6/18) at RSL: Scored the team’s only goal in the 1-1 draw as a second-half sub…(6/25) vs. HOU: Started and scored one goal, his second straight game finding the net, in the 2-2 draw…(9/10) at CHV: Registered first MLS hat trick, scoring all three goals in the 3-0 victory.

CLUB CAREER OUTSIDE OF MLS: Began professional career in December 2006, signing a contract with Swedish club Hammarby…In over two seasons with Hammarby, appeared in more than 60 games in all competitions, scoring 24 times…In 2008, led the club with 14 goals and added three assists in 26 league games…Opened the 2009 season with seven goals before transferring to French Ligue 1 side Sochaux in July…In second appearance with new club, scored the first two goals of his French career, coming off the bench in a 3-2 loss to Bordeaux…Made eight appearances in the 2009-10 Ligue 1 season before sustaining serious injuries in an Oct. 13 car accident while on international duty…Injuries kept him out the remainder of the season and much of the following year before he joined D.C. United on loan in 2011…Returned to France following his spell with the Black and Red, making two appearances in the 2011-12 season…In July 2012, signed with Danish club Randers FC…Appeared in 26 games with the club in all competitions.

NATIONAL TEAM (UNITED STATES): Has been capped 17 times by the U.S. Men’s National Team, scoring four times…Has also made appearances with the U.S. Under-18, Under-20, and Under-23 sides, including representing the country at the 2008 Olympics in Beijing, China…Made international debut on June 2, 2007, in a friendly against China…Scored first goal for the U.S. in the World Cup Qualifying defeat to Trinidad and Tobago on Oct. 15, 2008…In 2009, played in 13 games for the U.S., including four games at the 2009 FIFA Confederations Cup in South Africa…Scored against Egypt, helping the U.S. reach its first final in a FIFA tournament…Took part in the 2009 CONCACAF Gold Cup and made five appearances in 2009 World Cup qualifiers…Scored in the Gold Cup against Grenada, and in a qualifier against Mexico…Was on national team duties in Washington, D.C. in October 2009 when he suffered life-threatening injuries in a car accident.

COLLEGE (BOSTON COLLEGE): Played three seasons at Boston College, totaling 24 goals and 11 assists in 37 appearances for the Eagles…Left school before his senior season to sign a professional contract with Swedish club Hammarby…As a junior in 2006, scored 15 goals in only 16 games, adding six assists…Set a school record for goals in a season, and had five multi-goal games, including one hat trick…Earned ACC Offensive Player of the year honors and was named to the NSCAA All-American First Team…A finalist for the MAC Hermann Trophy, given annually to the nation’s top college soccer player…Missed all but one game of his sophomore season with an injury…As a freshman, tallied nine goals, a team high, and added four assists in 20 starts…Recognized as the BIG EAST Rookie of the Year, helping the Eagles reach the Third Round of the NCAA Tournament…Also named to the Soccer America and College Soccer News Freshman All-American teams, as well as National Soccer Coaches Association of America’s  All-New England First Team.

PERSONAL: Originally from Manchester, N.H. …Attended Brooks School in North Andover, Mass., graduating in 2004…Set several Brooks scoring records with 29 and 30 goals in his junior and senior seasons, respectively…As a senior, led Brooks to a 15-0 league record and New England Class-A Championship…Also starred in wrestling in high school, earning National Prep All-American honors as a senior…A passenger in a serious automobile accident on Oct. 13, 2009 in Washington, D.C. while on national team duties, resulting in numerous major injuries…Married his college girlfriend, Nina, in June 2012…He and Nina had twin boys, Rhys and Dakota, in March 2016. 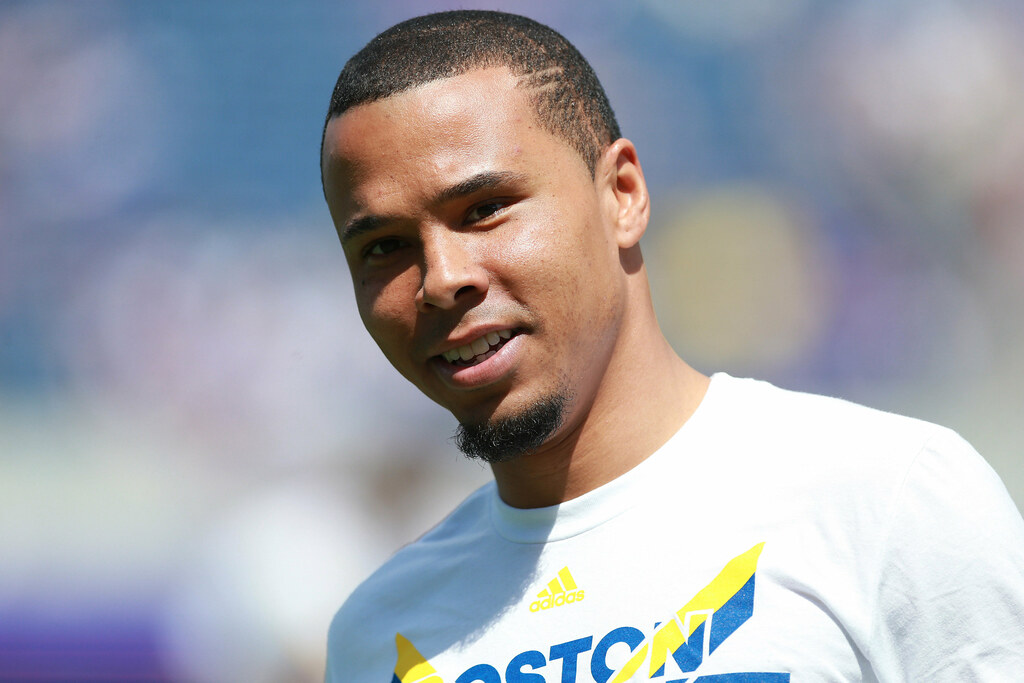